Meet the Spouse: The DDH 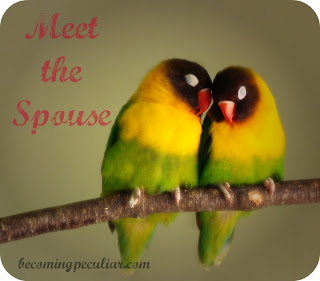 Kathleen at Becoming Peculiar had the genius idea to share posts about our spouses. Because we write about our lives, our children, even our pets, but often our spouses make only cameo appearances on our blogs.

So without further ado...the DDH!


The DDH and I met in college (Blow, 'Cane!). He was the Assistant Resident Director (the student staff member in charge of all the other student staff members) for the Honors House (where we lived) and another dorm. I was a freshman. There was probably a rule against that, oops.

His first memory of me is of a dorky freshman wearing a straw cowboy hat. Admittedly, that is precisely what I was. My first impression of him is probably lost somewhere in a blur of new faces and panic, but I came to know a man who was funny, intelligent, interesting, and a firm Christian (though he tricked me into thinking he was Lutheran, which he wasn't).

After only a few weeks hanging out with him, I said to myself, "This is the man I'm going to marry." And I did.

Ironically, at the time I decided that, I was oh-so-generously helping him woo a girl at a different college. Because I'm tricksy like that.


We began dating steadily October 1 (having just met in August*). We continued dating all through my freshman/his junior year and my sophomore/his senior year.

During this time, we managed to take a couple of courses together (one block level psych class (his major) and one block level history class (my minor)). We were both very active in Alpha Phi Omega, a co-ed community service fraternity, and traveled together to Denver, St. Louis, Louisville, and other less exotic places for fraternity conventions, as well as logging countless service hours together. During this time, his parents went through a very messy divorce and his little brother's life spiraled out of control. I considered dumping him because he would answer his mom's phone calls and spend dozens of minutes talking to her while out on dates with me. In retrospect, this demonstrates his emotional stability and empathy, or something, but at the time it was really annoying.

Finally, during my junior year of undergrad and his first year of law school, in a paddleboat on the Schluchsee in the Black Forest, he asked me to marry him (I was studying abroad in Freiburg, Germany at the time). A week later, after spending six days traveling around Italy with my parents and siblings in an SUV that only nominally seated six people, he still wanted to marry me. So, we went ahead with planning a wedding and were married in the November after my graduation from college, in 2008.

He graduated law school and passed the bar in 2011, and has been working as an assistant district attorney in the juvenile bureau for the last year and a half. (That's one reason I call him the DDH on the blog, though many of you know his real names. There are people out there who don't care much for prosecuting attorneys, turns out.)


In some ways, I think we're too similar. We're both painfully shy as well as introverted, and incredibly indecisive. We have had more than one argument about not being able to choose a place to have dinner or a way to spend an afternoon, and somehow we each resent being the one who "always" has to make these decisions.


But in other ways, he complements me beautifully. He is very handy, willing and able to fiddle with everything from electronic gadgets to Christmas lights to furniture to fix, build, or otherwise make it work properly. I, on the other hand, am something of a technophobe who has difficulty following the instructions in beginner Lego kits.

He loves and supports me unconditionally, never complaining about the strange dishes I cook (though he does give his honest opinion) or my various other experiments, and always egging me on to write more.

He loves the things that I love, like food and travel and cheesy action movies. He's a gift-giver and a romantic and general all-around thoughtful guy.

I mean, he has his faults, and we disagree on lots of things big and small, from televisions in bedrooms to fine details regarding the doctrine of Original Sin. I suppose life would be pretty boring if we agreed on everything. And anyway, the important thing is, he always takes my side against his mother, even when I am, ah, less than delicate about expressing my opinion about her opinions (heh).

In particular, I have always envied him his certainty about his calling. He has known he wanted to be a lawyer since high school. He worked steadily through high school, college, and law school with that goal in mind, and now here he is. He loves his job. He loves the law. He loves being a lawyer, and he loves the kind of law he practices right now. I have never known what I want to do and have never loved a job. I envy him that certainty and sense of vocation, and I am so glad at least one of us has it.

And he loves T-Rex. Watching him with our son the past three months has been a joy. He plays with him and shows him off and rocks him when he cries. He not only never once questioned my decision to go with cloth diapers, he volunteers to change them. He is a wonderful father, and I can't wait to see them together as T-Rex grows and as (hopefully, eventually) other children join our family.


Basically, he's the best. I am blessed far beyond what I deserve.

Linking up at Becoming Peculiar for the Meet the Spouse! carnival.

*Few people, however, can beat my parents, who were introduced on a blind date the day after Christmas and were married the next March, about eleven weeks after they met. And they're still married, almost 31 years later.

In music, canons and fugues are works that rely on the repetition and imitation of themes in two or more voices.

Rounds such as "Row, Row,Row Your Boat" are simple canons; Johann Pachelbel may have been the original One-Hit Wonder with his famous "Canon in D."

The story of a life is a canon writ in deeds--repetitions and imitations that together tell the story of a life. Each person's deeds are their voice in the greater Story. Here's a verse or two of mine.

Katie
A desert girl transplanted to the Oklahoma prairie, where she lives with her Darling Devoted Husband, an Adorabeagle, a Labbydorable, and a Diva Bunny. A human Critter is scheduled to join the menagerie in November 2012.